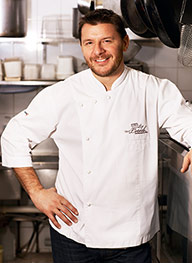 Manu Feildel was destined to become a great chef from the moment he was born – his great grandfather, grandfather and father were all chefs.

From humble apprentice in his father’s restaurant in France, to Head Chef at London’s well-known restaurant Livebait (nominated UK’s best seafood restaurant in 1998). 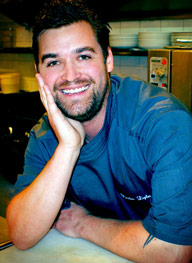 Head chef Nicolas Liglet is a food-mad native of Toulouse, famous for its cassoulet and foie gras in south-west France.
Nicolas developed his passion for cooking at age 17 by apprenticing at 1-starred Michelin ”La Table des Frères” in Biarritz.

In 2002, he continued following his nose for great food to Marseille and worked under renowned chef Gerald Passedat at his 3-starred Michelin ”Le Petit Nice”.

Yearning to travel, he packed his bags for St Barts in the Caribbean to cook at Relais & Chateaux property ”Le Toiny” under Maxime Deschamps in 2004. Having satisfied his travel bug (for a while anyway), he returned to Monaco and trained under iconic Joel Rubuchon at his 2-starred Michelin ”Restaurant de Joel Rubuchon”.

Nicolas’s sunburnt nose led him to Sydney and a stint at Guillaume Bennelong at the Opera House in 2008. After getting a whiff of Australia’s great French cuisine offerings, Nicolas opened ”Baroque Bistro” at the Rocks as Sous Chef. In 2010, he found himself at a little star L’etoile in Paddo and has been part of the family ever since.